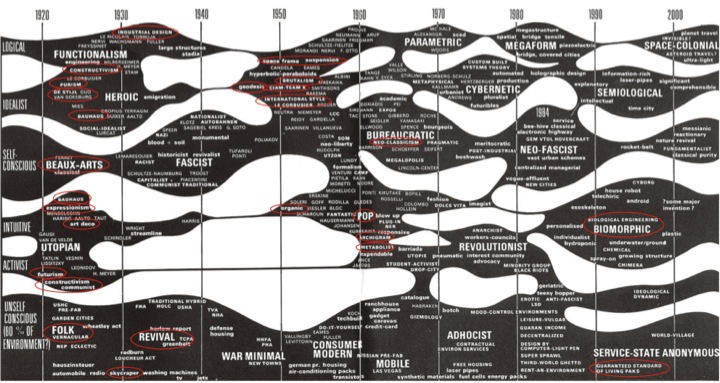 Architectural theory is a broad category that stems from the intellectual act of articulating ideas about architecture.  Theoretical discourse has taken various forms since antiquity, but has been recently characterized as speculative, anticipatory and catalytic in nature and therefore seeking to propose alternative solutions to the state of the discipline.  By contrast, it has also been argued that it is sufficient for architecture to remain a purely theoretical excercize.

This lecture course will focus on the selected topics which have characterized architectural theory since the modern era and the vehicles used to disseminate architectural ideas, from the rise of the manifesto to the foundation of magazines dedicated to architectural theory to the expansion of the internet.  We will study the development of a modernist discourse and, in turn, the trends that arose in reaction to it after the second world war.  We will then turn towards porousness of architectural theory to other fields, especially after the revolutionary events of 1968, including aesthetic theory, politics, technology, structuralism, philosophy and biomimicry.

We will read original texts as well as study the contexts in which those texts were produced.  It is imperative to complete the assigned reading prior to the corresponding lectures. Assignments and exams will stress comprehension, insight and articulation over rote memorization.